Although football has been one of America’s most popular sports for decades, participation is slowly decreasing. Football can be extremely dangerous. Recently, a teenager in Georgia received a fatal brain injury during a football game, highlighting the dangers players face on the field.

The Tragic Outcome of an Overlooked Hit

The high school linebacker was rushed to the hospital during a Friday night game in late September. The teen was six feet tall but only 150 pounds. Players on the opposite team had players up to 265 pounds. After a hit in the third quarter, the referee stopped the game, so the teen could come off the field after a play.

Initially, the teen was brought off the field for a leg injury; however, he quickly began to experience other symptoms as his left leg and arm went numb. He eventually became unresponsive and was rushed to the hospital. Doctors undertook two surgeries to relieve the boy’s brain swelling, but after several days, he succumbed to his injuries.

What is particularly tragic about this account is the teen’s family believes it was a hit during the second quarter that caused the teen’s brain injury. The teen played through the rest of the second quarter and into the third quarter before being evaluated, and he was only evaluated because of another perceived injury.

While fatal brain injuries during football games are uncommon, players are taking hits to the head that are causing long-term damage. Football players can develop debilitating neurological conditions later in life due to their time spent on the field in younger years. Every time a brain cell dies, it releases a protein that causes damage and eventually death to other brain cells. There is no way to stop this process, so it’s incredibly important for football players to decrease the number of hits to the head.

Sports Organizations Have A Responsibility to Protect Players

Unfortunately, organizations like the National Collegiate Athletic Association (NCAA) didn’t warn players the hits they take on the field could cause permanent damage. Until recent years, the NCAA did not have adequate concussion management protocols in place to protect students from serious injuries. The NCAA had a responsibility to keep players safe, but blatantly chose not to.

Former NCAA players may be able to hold the NCAA accountable for its negligence. Raizner Law is helping former NCAA football players file lawsuits against the NCAA to obtain compensation for their injuries. Contact us today for a free consultation to discuss your legal options and how we can help. 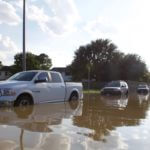 Harris County Approves New Flood Plain Maps, But Will They Come Too Late?